The Pietà by Michelangelo Buonarrot

The Pietà or "The Pity" (1498–1499) is a work of Renaissance sculpture by Michelangelo Buonarroti, housed in St. Peter's Basilica, Vatican City. It is the first of a number of works of the same theme by the artist. The statue was commissioned for the French Cardinal Jean de Bilhères, who was a representative in Rome. The sculpture, in Carrara marble, was made for the cardinal's funeral monument, but was moved to its current location, the first chapel on the right as one enters the basilica, in the 18th century. It is the only piece Michelangelo ever signed.

This famous work of art depicts the body of Jesus on the lap of his mother Mary after the Crucifixion. The theme is of Northern origin. It is an important work as it balances the Renaissance ideals of classical beauty with naturalism.

Michelangelo di Lodovico Buonarroti Simoni was born March 6, 1475  and was an Italian sculptor, painter, architect and poet of the High Renaissance born in the Republic of Florence, who exerted an unparalleled influence on the development of Western art. 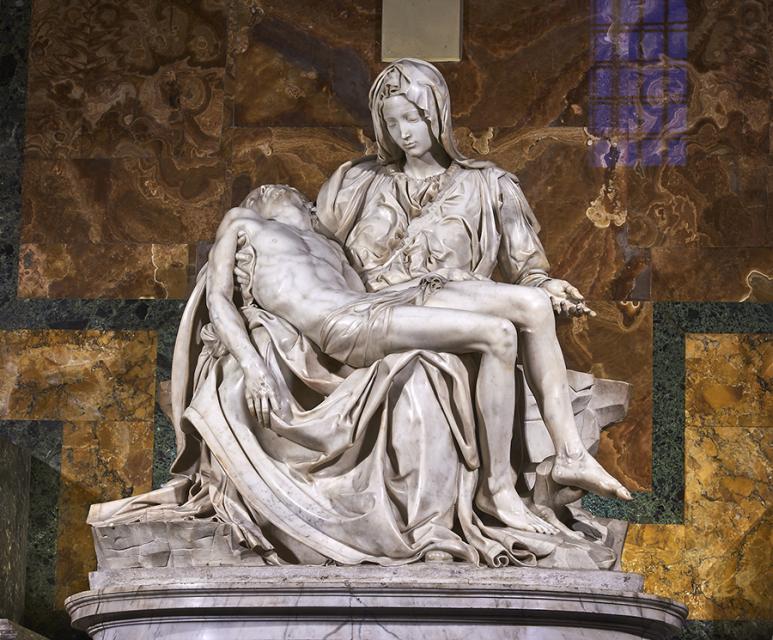