Berthe Morisot (1841-1895) is one of the new artists being considered for the revised Art Humanities curriculum. As one of the only female painters involved in the Impressionist movement, Morisot brought a unique perspective to her images of nineteenth-century Parisian life, often focusing on domestic scenes and the lives of women. Though lesser known than her male counterparts, Morisot made enormous contributions to the Impressionist movement. Her work has been the subject of two books by Professor Anne Higonnet, Berthe Morisot. A Biography (1989) and Berthe Morisot’s Images of Women (1992). Read below for an excerpt of Higonnet’s work on Morisot’s painting The Sisters. 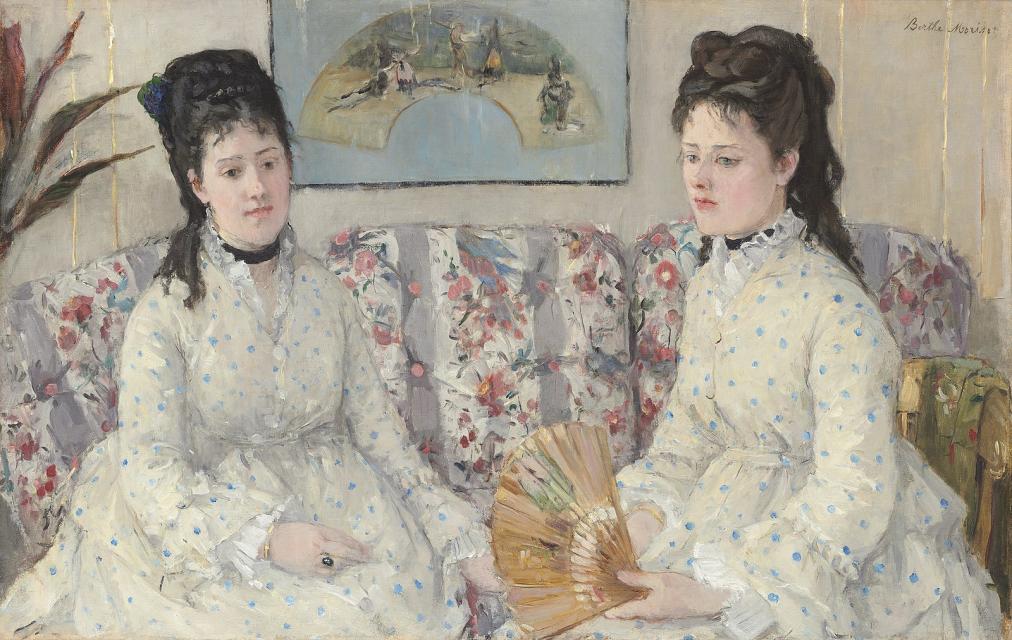 While it was Cassatt and Morisot, not surprisingly, who contended the most often with feminized media, all their great male colleagues did too.

As a brilliant and early example of all these Impressionist tendencies, take Morisot’s 1868 Two Sisters. In this painting, Morisot explores gendered likeness and difference, conformity and individualism. The lady-like blue polka-dot on white dresses of the two sisters appear to be identical, and their faces resemble each other’s, yet they sit and look at slightly different angles; two sorts of fans are in play, one functional and feminine in the foreground, the other framed and ambiguous on the background wall; two sorts of domestic plants are also in play, one alive next to the sofa, the other printed in a repeating design on the sofa upholstery; the leaves of the live plant pun visually on both fans by fanning out from the painting edge. The fan on the wall is itself a hybrid, a fan-painting, therefore both feminine and masculine. Are the two sisters better connected physically, by the gesture of their hands, hidden by one fan, or mentally, by the other fan that bridges their heads? 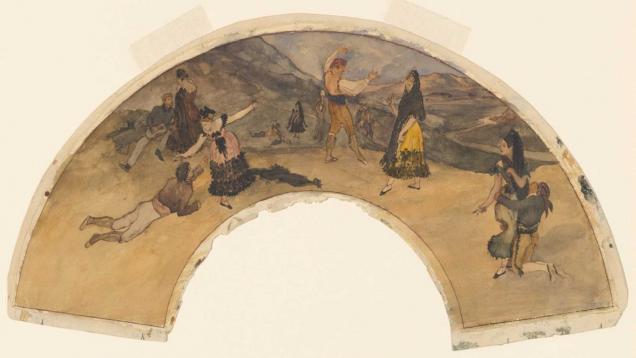 Here the issue of Japonisme is relevant. Like her colleagues, Morisot was fascinated by newly imported Japanese prints and usable arts. To western eyes, these images were strangely, marvelously abstract, and featured unreadable calligraphy. In many of the Japanese prints or paintings collected by Morisot and her colleagues, a woman, or two women, are shown in a foreground, while a fan-shaped cartouche hovers behind them in non-space. Could the fresh cultural difference of such images have triggered in Morisot’s mind a desire to play similarly with likenesses and differences among communication devices, even, or perhaps especially, when it came to subjects commonly considered natural in her own culture?

The signal presence of Morisot’s hybrid fan invites detective work. Solving a mystery thanks to clues was a modern method akin to skepticism. It took nothing for granted, and looked beneath surfaces for true evidence. Edgar Allen Poe, avidly read by Baudelaire and his friends, perfected the detective narrative in his 1841 short story Murders in the Rue Morgue, which Arthur Conan Doyle later emulated in his popular Sherlock Holmes stories. It is therefore entirely appropriate to do the detective work Morisot solicits in Two Sisters to find that her fan-painting represents a gift from Degas.

Degas was fascinated by the ambiguity of fans. He featured functional fans prominently within many of his paintings, and also painted many hybrid fan-shaped paintings. (So did Camille Pissarro, Paul Gauguin in the next generation of painters, and the Impressionists’ literary friend Stéphane Mallarmé.) Perhaps this very ambiguity had prompted Degas to give Morisot a fan painted with ambiguously layered clues. Superficially, the Spanish dancers and musicians he chose for his subject might refer to associations of fans with Spain in addition to the associations with Japan. Flatteringly, the subject might refer to the dark, Goya-esque, style of feminine beauty Manet was about to attribute to Morisot the model – as opposed to Morisot the painter -- in his 1868 Le Balcon (which Manet might even have been painting when Degas painted his fan, the dates are so close). More seriously, the subject refers to the book Contes d’Espagne et d’Italie, written by Alfred de Musset, then famous for having been the lover of George Sand, the most famous woman intellectual of the previous French generation.

By giving Morisot a hybrid fan-painting which referred to Sand, Degas challenged her to become a great woman intellectual in her generation. Two Sisters ponders the gender boundaries Morisot would have to cross to meet Degas’s challenge. A few years later, when Degas invited Morisot to join the exhibition that would give Impressionism its name, saying simply that she was too good a painter for the group to do without, she officially joined the movement.